A Funny Thing Happened on the Way to the Spa

Posted on November 29, 2022 by Robert Lockard, the Deja Reviewer

Life doesn’t always go the way we expect. Take, for example, my most recent visit to a spa.

The older I get, the achier I feel. My shoulders tend to get extremely sore from time to time. To combat this, I’ve been getting massages every few months. My favorite place to get a massage is at the Seasons Salon and Day Spa in Orem, Utah. I’ve tried numerous other massage places, but I keep returning to this one because they always do the best job. I say this as someone getting no compensation to endorse them. I’m an impartial judge.

Two Thursdays ago, I set an appointment with them to come in as soon as they opened on Saturday, 11/19/2022. Little did I know that something wholly unexpected was about to happen that day. A funny thing happened on the way to the spa, if you will. Not funny haha, but more like strange and unfortunate.

I was approaching in my car but, as I was waiting at a stoplight, I noticed something odd. There were ambulances and firetrucks with their lights on blocking the entrance into the parking lot of the spa. I decided it would probably be best if I turned into a grocery store parking lot just before the spa. It looked like there was a major fire engulfing a building. So I got out of my car and started taking pictures. Here’s what I captured as I got closer to the source. 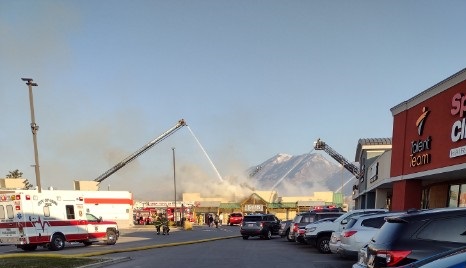 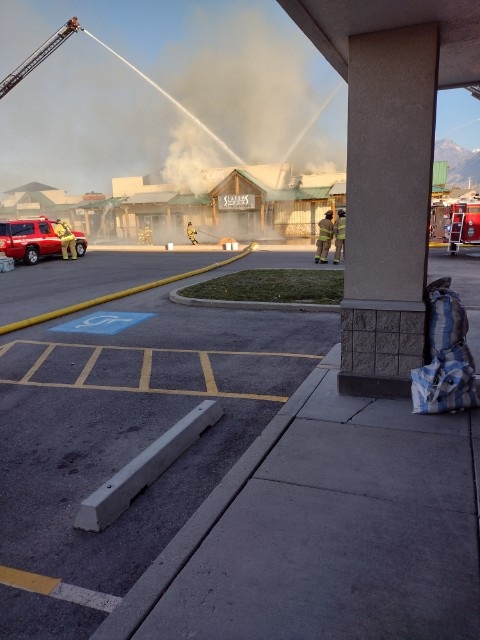 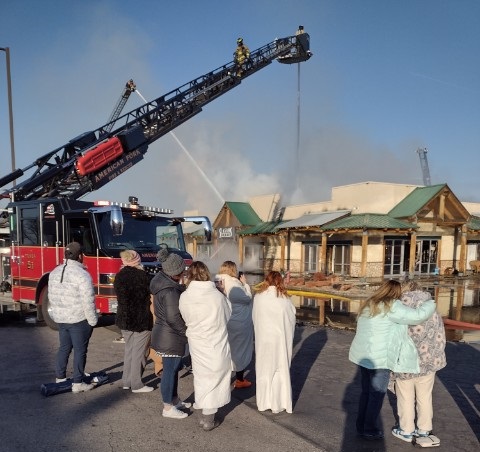 That’s right, the Seasons Spa was on fire. Smoke was billowing out of its windows and roof. Firemen were everywhere on the ground and on ladders spraying the building down. A deep pool of water from the firehoses covered the ground all around the building. Workers at the spa were wrapped in blankets in the cold wintry air comforting each other and pondering their fate.

I stayed for 15 minutes and then returned home. I later learned that the fire started a few hours earlier. I’m grateful that no one was inside at the time, and no one was injured. Just a catastrophic loss of my favorite place for a massage.

Thankfully, I received an email a week later letting me know that they’re open for business again at another location. They’re sharing space with another spa while they try to get into a permanent building again. I commend those good people for their resilience. I definitely plan on going there soon for a massage.

It’s crazy to be so close to tragedy. I don’t go there all the time, so it’s quite a coincidence that I had an appointment on the very day a fire started and engulfed their building. Hopefully it was just an accident and not deliberate.

This was something important that happened in my life recently, with no real connection to a movie or anything I usually write about. I pray that everything will be all right for these wonderful people, and I hope we’ll all count our blessings during this Christmas season.

Want to Support the Deja Reviewer?

If you’d like to support the Deja Reviewer, please consider donating a few dollars to keep this site going strong. I’ll even send you an original joke if you do! Try it, and prepare to enjoy a good chuckle.

Robert Lockard has been a lover of writing since he was very young. He studied public relations in college, graduating with a Bachelor’s degree in 2006. His skills and knowledge have helped him to become a sought-after copywriter in the business world. He has written blogs, articles, and Web content on subjects such as real estate, online marketing and inventory management. His talent for making even boring topics interesting to read about has come in handy. But what he really loves to write about is movies. His favorite movies include: Fiddler on the Roof, Superman: The Movie, Star Trek II: The Wrath of Khan, Back to the Future, Beauty and the Beast, The Fugitive, The Incredibles, and The Dark Knight. Check out his website: Deja Reviewer. Robert lives in Utah with his wife and four children. He loves running, biking, reading, and watching movies with his family.
View all posts by Robert Lockard, the Deja Reviewer →
This entry was posted in Random Stuff and tagged fire, personal. Bookmark the permalink.