Posted on October 30, 2012 by Robert Lockard, the Deja Reviewer

Frank Capra was sometimes criticized for creating films labeled as sappy. Mr. Smith Goes to Washington and It’s a Wonderful Life are prime examples of films that are superbly crafted while also dripping with sentimentality. Today I’m going to talk about one of Capra’s lesser-known films that is nothing like his others: 1944’s Arsenic and Old Lace.

Everything and everyone in this witty comedy is drenched in irony. A confirmed bachelor is getting married, his two sweet aunts are serial killers, and his serial-killer brother had plastic surgery to look like a famous actor even though he wants to keep a low profile. All of this is a perfect setup for whacky hijinks, and the film takes advantage of it completely.

So let’s brew up some trouble as we indulge in what makes Arsenic and Old Lace a forgotten film gem.

Take Me Out to the Brawl Game

For some reason, this movie begins with a baseball game. A batter is called out and he disagrees with the umpire, so like a mature adult he pulls the umpires mask off and punches him in the face. This is nowhere near as funny as a similar scene at the climax of 1988’s The Naked Gun, but it’s sort of amusing to see the benches clear and chaos ensue. This scene comes out of nowhere, is completely random, serves no purpose to the plot, and is never mentioned again. It’s an odd start to the film, but luckily, it’s brief and the story gets going right after it.

Killing Them with Kindness

Most of the action in the film takes place in the Brewster home. The Brewster sisters are elderly women who are kind and gentle in everything they say and do – even when it comes to murder. They bring lonely old men who have no family or reason to live into their home and they kill them with poison and then bury them in their cellar. Now is that a creative setup for a dark comedy or what?

No one suspects these sisters of any wrongdoing, most especially their nephew Mortimer. He’s the confirmed-bachelor-turned-newlywed I mentioned at the start. Mortimer is played by Cary Grant, and he gives a delightful performance as a man constantly on the verge of becoming unhinged by all the insanity going on around him.

The Brewster sisters aren’t strong enough to lift dead bodies by themselves, so they rely on their younger brother to do that work for them. He is absolutely convinced that he is Theodore Roosevelt. We never find out what his real name is. He has some of the best lines, such as “There’ll never be another Roosevelt in the White House.” And he has a nasty habit of yelling “Charge!” at the top of his lungs every time he goes up a staircase because he believes he’s going into battle. It seems like that joke would get old fast, but they find creative ways to make it fresh each time. Its use at the end of the film is also particularly inspired. 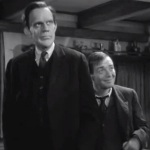 If dealing with two homicidal aunts and a delusional uncle weren’t enough, Mortimer also finds himself matching wits with his brother who recently escaped from a mental asylum. His name is Johnny and he’s accompanied by a doctor named Einstein, played by the inimitable Peter Lorre. These two characters steal the show. They are always in command of every scene they’re in, and they have the most hilarious moments in the film.

The secret to why they are so captivating is that they are playing it straight the whole way through, never realizing that they’re in a comedy. They are focused on hiding a dead body, killing Mortimer, and evading the police, and despite all these serious things somehow they are so funny to watch. It helps add some levity to their characters that Dr. Einstein accidentally made Johnny look like Boris Karloff in Frankenstein after operating on him while intoxicated. All the comments that other characters make about Johnny’s hideous facial features infuriate him more and more while making the audience laugh harder.

Too Much of a Good Thing

There’s a really clever moment in the film that was probably the inspiration for a similar scene in the horror satire Scream. Mortimer tells Dr. Einstein about a cliché play he recently watched in which the main character foolishly stays in a house with a known killer, sits in a chair with his back to the killer, and waits to be tied up and killed. While he says all of this, he acts out what he’s describing and so does Johnny in the background. Before long he finds himself tied up and about to be killed in the most painful way imaginable.

If that isn’t the inspiration for the scene of Jamie Kennedy telling Jamie Lee Curtis to look behind her while he should follow his own advice, I don’t know what is. However, where Scream knew when to stop, Arsenic and Old Lace doesn’t. It pats itself on the back for its ingenuity by repeating this clever setup three more times! Scream only did it once, and that made it all the more memorable and special. But this film kills the joke by overusing it. Oh well. That doesn’t change the fact that the first time was quite brilliant.

I love the moment when the police arrive and a fight breaks out between them and Johnny. In a normal film, we would see all the well-choreographed action taking place, but this film has other plans. After such a huge ordeal that led to this fight, Mortimer sits it out and makes some hilarious comments about the ludicrousness of everything that’s going on. He’s exhausted and so is the audience, so it’s a perfect moment to relax while all sorts of excitement takes place off screen. It’s an incredibly appropriate scene because it highlights all of the irony that has taken place throughout the story. I love it.

In the end, Johnny is arrested, Dr. Einstein sneaks away, Teddy and the Brewster sisters voluntarily commit themselves to an insane asylum, and Mortimer takes his bride over his shoulder and shouts “Charge!” as he hurries to his well-deserved honeymoon. It’s a nice happy ending. My only complaint is that the final scenes drag on too long. If the movie had ended shortly after the big fight, it would have packed a more potent punch. I can’t complain too much, though. This is one comedy you should definitely check out. Its witty jokes and twist-packed plot will keep you laughing and guessing until the end.

Happy Halloween, everyone. By the way, if anyone understands the baseball scene at the start, feel free to fill me in because I still don’t understand what it had to do with anything.

All images are the copyright of MGM.

Robert Lockard has been a lover of writing since he was very young. He studied public relations in college, graduating with a Bachelor’s degree in 2006. His skills and knowledge have helped him to become a sought-after copywriter in the business world. He has written blogs, articles, and Web content on subjects such as real estate, online marketing and inventory management. His talent for making even boring topics interesting to read about has come in handy. But what he really loves to write about is movies. His favorite movies include: Fiddler on the Roof, Superman: The Movie, Star Trek II: The Wrath of Khan, Back to the Future, Beauty and the Beast, The Fugitive, The Incredibles, and The Dark Knight. Check out his website: Deja Reviewer. Robert lives in Utah with his wife and four children. He loves running, biking, reading, and watching movies with his family.
View all posts by Robert Lockard, the Deja Reviewer →
This entry was posted in Forgotten Film Gems and tagged comedy, films, frank capra, halloween, holiday, humor, movie review, movies. Bookmark the permalink.