Posted on September 29, 2015 by Robert Lockard, the Deja Reviewer

The Wedding Singer is my favorite Adam Sandler movie. It was the first of his films that I saw all the way through in one sitting, and I still have a soft spot in my heart for it.

I especially like how this movie handles serious topics. When characters get drunk they vomit, make bad decisions, and feel terrible in the morning. The main characters don’t sleep around, and they have a lot more self-respect than the side characters who do. In fact, one of the side characters admits that his lifestyle is keeping him from being happy.

“I’m not happy; I’m miserable.” That is the most brutally honest line in a romantic comedy, and it comes from The Wedding Singer. It’s spoken by a character who is desperate to come across as a tough guy, but inside he’s full of angst and self-doubt. This five-word admission speaks volumes about his character and about what a lot of people seem to be missing in their lives.

Let’s talk about the conversation that leads up to that poignant moment and uncover the dirty little secret that no one wants to admit.

Robbie Hart: You know something? You were right. You’ve always been right.

Sammy: What have I been so right about?

Robbie: Women. You just have fun with them. You get emotionally involved with them and what do they do to you?

Old drunk guy: They rip your heart out of your @#%!

Robbie: I think I’m in love with her. But I gotta get that out of my head, you know? From now on, I’m just – I’m gonna be like you, man. I’m just gonna be with a different chick every night and then I’ll send them packing.

Sammy: Sounds like you got it all figured out.

Robbie: I mean, I’m gonna have to give them cab money to go home ‘cuz I’ll feel bad if I don’t. But after that it’s bye-bye birdie.

Robbie: That’s it, man, starting right now me and you are gonna be free and happy the rest of our lives!

Robbie: Yeah, I read that Fonzie wants to be a director and Barbarino, I think the mechanical-bull movie – I didn’t see it yet.

Sammy: Their shows got canceled ‘cuz no one wants to see a 50-year-old guy hitting on chicks.

Robbie: What are you saying?

Sammy: What I’m saying is all I really want is someone to hold me and tell me that everything is gonna be all right.

Old drunk guy: (Hugging Sammy) Everything is gonna be all right.

Sammy: If you’ve found someone you can love, you can’t let it get away.

So much is in this exchange. Let’s break it down. At the start, Robbie is heartbroken and he wants to believe that his friend Sammy has been right all this time about how to handle relationships. He sees Sammy acting happy and seeming to have found the formula to felicity by being free and loose with his sex life.

Sammy is surprised that Robbie is so eager to jump on his bandwagon. It’s more a sign of Robbie’s weakened state that anything Sammy has said or done to convince him of the error of his ways.

Robbie would never be able to find much fulfillment as a womanizer anyway. Even when talking about one-night stands and sending the girls packing, he still feels bad and cares about their well-being.

The conversation takes a sudden turn after Robbie proclaims that he is going to forget about lasting love and just live for the moment. He wants what he thinks Sammy has: Happiness. But Robbie is stunned when Sammy admits, “I’m not happy; I’m miserable.” 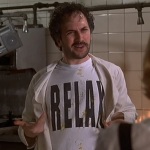 The focus of the conversation shifts from Robbie’s lofty wishes to Sammy’s painful reality. Sammy isn’t free; he’s a slave to his passions.

He believed the lies he was taught on TV about happiness being found in the form of conquests. A person who seeks pleasure from multiple partners doesn’t respect himself or herself. It takes a wonderful ego to declare, “I am worth loving.”

Choosing someone to be your spouse is one of the most contradictory things imaginable. It’s absolutely egocentric to say that someone should spend their life with you and yet it’s also incredibly self-sacrificing to say that you will forsake everyone else and only share your most intimate self with that one person. Marriage happens so frequently that I think we forget what a powerful force it is. It is ultimately a statement of self-confidence to judge someone worthy of being married to you.

In other words, people won’t find lasting happiness in a hookup culture. The two things are mutually exclusive.

Happiness isn’t something you chase; it’s something you achieve. The more love you seek, the less you’ll find. On the other hand, the more love you give, the more you’ll receive. People do what they do because they expect that it will maximize their joy in life. I don’t think many people actively seek out what will make them miserable. And yet we’re lied to about what leads to happiness.

The dirty little secret is that a lot of people are miserable. There’s a lot of needless misery in the world. People wouldn’t be so unhappy if they would just take Sammy’s words to heart. Don’t worry about being Fonzie or Vinnie Barbarino. They aren’t worth emulating. First of all, they’re fictional and unrealistic. Second, they didn’t last long. Their shtick of always getting the girl got old fast. Eventually, their audiences grew up and moved past such silly notions of loveless, effortless sex. Love is an important part of lasting happiness. Not that your happiness depends on what someone else thinks of you, but that your love for yourself is demonstrated by the kind of person you choose to share your deepest self with.

In the end, Sammy gets what he wants: Someone to hold him and tell him everything will be all right. But Robbie needs more than that. He needs to take action to make sure he doesn’t lose the love of his life.

Interestingly, Robbie begins and ends the conversation by telling Sammy he is right. But the first time he’s telling the Sammy he’s imagined in his mind that he’s right and at the end he’s telling the real Sammy that what he’s revealed about love is right. To quote Fiddler on the Roof, “He’s right and he’s right? They can’t both be right.” Indeed.

What Robbie has learned is that he can’t judge himself by unrealistic standards. Happiness isn’t found by following the crowd but by doing what you know is right. If everyone else is doing what’s right, it’s still up to you to decide for yourself that it’s the right thing to do, and if everyone is doing the wrong thing it’ll take more courage to go against the grain and find the right way. But it’s worth it. Because after all the glitz and hype, even the most famous stars in the world have to go home and be alone with their thoughts late at night. Do they find a lot to like in themselves in those moments of quiet introspection?

I think a good number of them, if they were really honest with themselves, would admit, “I’m not happy; I’m miserable.”

I married a woman I respect because I didn’t think lowly of myself. I thought I deserved a good wife who would offer me at least as much as I could offer her. Any other type of relationship would have bred resentment and distrust. I was never interested in playing the hookup game because I knew it was rigged against me. I learned that at an early age. The Wedding Singer didn’t cement that idea in my mind, but I’d be lying if I said it didn’t feel good to have it championed in a piece of popular entertainment.

If you ever feel like happiness is impossible to find, just remember this film’s sage advice: If you make good choices everything is gonna be all right.

All images and the video clip are the copyright of their owners.

Robert Lockard has been a lover of writing since he was very young. He studied public relations in college, graduating with a Bachelor’s degree in 2006. His skills and knowledge have helped him to become a sought-after copywriter in the business world. He has written blogs, articles, and Web content on subjects such as real estate, online marketing and inventory management. His talent for making even boring topics interesting to read about has come in handy. But what he really loves to write about is movies. His favorite movies include: Fiddler on the Roof, Superman: The Movie, Star Trek II: The Wrath of Khan, Back to the Future, Beauty and the Beast, The Fugitive, The Incredibles, and The Dark Knight. Check out his website: Deja Reviewer. Robert lives in Utah with his wife and four children. He loves running, biking, reading, and watching movies with his family.
View all posts by Robert Lockard, the Deja Reviewer →
This entry was posted in Random Stuff and tagged adam sandler, comedy, films, love, movie review, movies, relationships, romance, wedding singer. Bookmark the permalink.