Posted on June 3, 2015 by Robert Lockard, the Deja Reviewer

Penelope is a whimsical little film about a girl who spends the first 25 years of her life with a pig snout for a nose. I thought it was bizarre the first time I saw it. But then I gave it another try and I was surprised at how much I enjoyed it after getting over what initially put me off about it. And then I saw it a third time and I discovered a wonderful new layer that made the whole thing even more beautiful.

So let’s uncover everything I love about the surprisingly meaningful romantic comedy Penelope. And at the end I’ll reveal the wonderful message that is hiding in plain sight in this film.

Whoever cast this movie could not have done a more perfect job, especially nabbing James McAvoy as the main love interest, Johnny. Keep in mind, this was 2006. He had just played Mr. Tumnus in The Chronicles of Narnia: The Lion, the Witch and the Wardrobe, but he hadn’t yet hit the big time with roles in Wanted and the two latest X-Men films. He does an incredible job playing a young man teetering on the edge, trying to do the right thing, and struggling to fix his screwed-up life.

Christina Ricci gives her usual effortlessly awesome performance as the titular Penelope. You really feel her frustration and are rooting for her the whole way through the film to find happiness, snout or no snout.

And then there’s Peter Dinklage and Catherine O’Hara. Dinklage was right on the cusp of becoming a household name with the role of Tyrion Lannister in the TV series Game of Thrones. And O’Hara you’ll undoubtedly recognize as the mom in Home Alone. Everyone fits perfectly and makes their characters seem so rich and complex.

I love the way the love story plays out. Penelope has spent years getting rejected by one rich young man after another. They all scream and run away in terror after seeing her face. She has naturally become jaded because of all this, as well as being shut in and kept from the outside world her whole life.

But then one day Johnny comes and (through a series of accidents) he winds up talking with Penelope through a speaker without seeing her face. This adds a tantalizing amount of suspense because we aren’t sure how he’ll react when he sees her. We don’t even know how he really feels about her because he has some questionable motives. He comes back several times and each time he wins Penelope’s heart a little more until she finally reveals herself to him. He’s shocked at first, but he quickly recovers and decides that looks aren’t everything.

Normally, I’d be annoyed by misunderstandings and mistaken identities keeping the two love interests apart. But this movie casts quite a spell that completely justifies keeping the two apart all through the second act. She winds up thinking he’s repulsed by her snout, just like every other suitor who’s seen her. But he is actually trying to protect her because he knows he doesn’t have the power to break the curse and transform her snout into a normal nose.

They spend a lot of time away from each other. She leaves her home and starts to experience the world while he goes on a different and yet parallel path.

This is all well and good, but what message is Penelope really trying to get across?

The Real Message of Penelope

What elevates Penelope is the fact that it’s not just a love story, but it’s also a story about overcoming addiction. Anyone who has overcome addiction or is working on fighting one will find plenty to love about this film.

The most obvious addict is Johnny. He’s a compulsive gambler. He stays up all night every night gambling his money away, which keeps him poor and miserable. He desperately wants to break free and return to his passion for music, but he can never quite do it because the stress builds up and he needs the release that only gambling can give him. Replace gambling with drugs, alcohol, pornography, or any other habit-forming substance and many people can relate to his plight.

After he starts talking with Penelope, he feels inspired to try to retake his life. The scene where he breaks away from the noisy and claustrophobic bar is a painful and yet triumphant moment. It feels like he’s literally ripping himself away from that gambling table. He faces an uphill battle in putting the pieces back together and staying away from his old habits, but he manages to do it. He pays back old debts, tries to make amends with people he’s hurt, and does other things a 12-Step AA participant does.

The film’s subtler hints at addiction come in the form of Penelope and Lemon. Penelope’s mother has hidden her daughter away for years, fearing the shame that would come upon Penelope and her family name if her disfigurement was ever made public. Shame is a powerful force that often makes people hide their addictions for fear that they’ll be exposed as hypocrites or deviants. But the more they try to hide their addictions and live double lives, the more they lose. Penelope’s parents try to put on a happy face for the cameras while keeping their daughter shut up in the house. But this clearly can’t go on forever, and eventually the word gets out about Penelope.

Penelope embraces who she is and learns to love herself. It turns out that that is the key to helping her get rid of her snout. With addiction, no one else can come in and save you from your struggle. You have to be brutally honest with yourself and focus on the good inside yourself in order to become a better person. 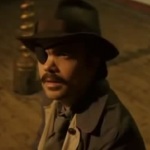 As I mentioned, Lemon is an interesting case, as well. He loses an eye and his reputation when Penelope’s mom attacks him for trying to take a picture of Penelope as a baby for a newspaper. He spends the next 25 years nursing a grudge against Penelope’s family. He wants to take revenge on them and be vindicated as a reporter. But as time goes on and he finally gets a golden opportunity to show the world what Penelope looks like, he has second thoughts. Johnny has shaken Lemon’s conviction that his crusade is just. The picture gets published against his wishes, however, and he has to deal with the fallout of that.

But he shows how much he has changed in the end when he has a chance to surreptitiously photograph the now-snout-less Penelope. He decides it’s not worth it, and he simply moves on with his life. As a side note, when I look at his eyepatch, I can’t help thinking of the scripture, “And if thine eye offend thee, pluck it out, and cast it from thee: it is better for thee to enter into life with one eye, rather than having two eyes to be cast into hell fire.” I don’t know if the filmmakers intended to make that metaphor, but I just think it’s another interesting connection.

Addictions never go away completely. They’re like a disease that can go into remission without ever being completely eradicated. Thus, they become a lifelong battle.

The three main characters win their battles, though they are still shown to be working on them at the end of the film. Johnny plans to leave the city to avoid temptation. Penelope apprehensively looks at her nose in a mirror, wondering if the snout will ever return. And Lemon comes close to snapping just one little shot of Penelope before he second-guesses himself.

The Power You Give the Curse

At the end of the film, Penelope finishes telling her story to her schoolkids and asks them what they think it means. They give a few childish responses before one kid wisely declares, “It’s not the power of the curse; it’s the power you give the curse.” Wow. Replace “curse” with “addiction” and you’ll recognize the moment I looked at this film in a whole new light.

Penelope is a modern-day fairytale that brilliantly portrays the struggle to overcome addiction. You can enjoy it as a quirky comedy or a satire of celebrity gossip, but I will always look at this film as speaking to the inner addict in just about everyone. It has such a hopeful message, and it was a pleasant surprise to find it.

All images are the copyright of their owners.

Robert Lockard has been a lover of writing since he was very young. He studied public relations in college, graduating with a Bachelor’s degree in 2006. His skills and knowledge have helped him to become a sought-after copywriter in the business world. He has written blogs, articles, and Web content on subjects such as real estate, online marketing and inventory management. His talent for making even boring topics interesting to read about has come in handy. But what he really loves to write about is movies. His favorite movies include: Fiddler on the Roof, Superman: The Movie, Star Trek II: The Wrath of Khan, Back to the Future, Beauty and the Beast, The Fugitive, The Incredibles, and The Dark Knight. Check out his website: Deja Reviewer. Robert lives in Utah with his wife and four children. He loves running, biking, reading, and watching movies with his family.
View all posts by Robert Lockard, the Deja Reviewer →
This entry was posted in Pleasant Surprises and tagged addiction, comedy, fantasy, films, funny, love, movie review, movies, penelope, relationships, romance. Bookmark the permalink.