Posted on November 10, 2015 by Robert Lockard, the Deja Reviewer

Timescape (also titled Grand Tour: Disaster in Time) is the best time-travel movie you’ve never heard of. It’s a quiet little movie filled with interesting ideas. The filmmakers did a lot with a limited budget, mostly by hinting at bigger things and relying on good old suspense, mystery, and likable characters to carry us through the film.

I highly recommend you go check out this movie. It feels like something out of a Ray Bradbury novel. Anyway, let’s take the grand tour and discover what makes Timescape a forgotten film gem.

Timescape debuted in 1992, just before several of its participants acquired a greater degree of fame. It was written and directed by David Twohy. You probably know him better as the co-writer of 1993’s The Fugitive and the writer/director of many other films, including The Arrival, Pitch Black, and the other Riddick films.

Jeff Daniels, who plays the main character Ben Wilson, had already done fine work in 1983’s Purple Rose of Cairo and 1990’s Arachnophobia. He would go on to even more fame and fortune with his star-making roles in 1993’s Gettysburg and 1994’s Speed and Dumb and Dumber. And Ariana Richards, who plays Ben’s daughter Hillary, went on to play one of John Hammond’s grandchildren in a little film called Jurassic Park. 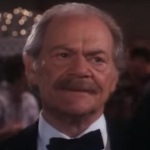 One actor probably looked very familiar to sci-fi fans back in 1992. George Murdock plays Judge Caldwell. Just a few years earlier he had played the God-like entity in Star Trek V: The Final Frontier and Admiral Hanson in the unforgettable Star Trek: The Next Generation two-part episode “The Best of Both Worlds.”

Plus, I kid you not, this movie (which includes time travel and prominently features a scene that occurs in the winter) has an actor named Time Winters.

What I love about Timescape is that, like any good time-travel story, it isn’t about time travel. It’s about a father’s love for his daughter. The time travel is simply a vessel for exploring what a father would do to try to save his daughter.

The story focuses on a clash between two men: Ben and his former father-in-law, Judge Caldwell. Ben and his wife got into a car accident years earlier, which left his wife dead and Ben emotionally broken. You see, he fled the horrific scene like a coward. He claims he was running for help, but he appears to be just completely terrified and unable to think straight.

Ben spends the rest of the film trying to get Hillary back. A lot of his thinking is fueled by fear. He is afraid of what will happen to Hillary, so he is constantly acting defensively. This turns out to be a disastrous strategy, but thanks to the magic of time travel, he gets another chance to go back in time and do things right. Unfortunately, he still keeps acting like a coward, only wanting to save his daughter, even though his whole town is in mortal danger. It’s only when he meets up with his previous self and the two share a brutally honest conversation that he realizes the error of his ways and starts thinking of more than just himself and his daughter. He grows as a character as he learns to stop running and become a hero.

Timescape builds to a beautiful climax that brings together everything the film has been setting up. The movie’s plot is set into motion when a group of bizarre tourists show up at Ben’s bed and breakfast. He quickly figures out that they’re from the future and they’re visiting terrible disasters that have occurred throughout history, from the 1906 San Francisco earthquake to the 1980 Mount St. Helens eruption.

Ben tries and fails to save half his town from being killed in fiery explosions that the tourists are there to witness. But he goes back in time and warns himself about what’s about to happen. And that’s where the film’s climax comes into play.

Timescape pulls a clever reversal of Back to the Future, which features a clock tower that never rings again after it’s struck by lightning. In Timescape, there’s a clock tower whose bells haven’t worked in years, and one night the two Bens break into the tower and start ringing the bells with sledge hammers. And they don’t just wail on the bells to indiscriminately make noise. They play the opening notes of Ben’s dead wife’s favorite song, “Für Elise.”

It’s a fantastic scene. You forget that it’s just one actor playing both roles because the image of the two Bens playing a tune together is done seamlessly. Just call him Big Ben.

This gets everyone in town to come and investigate the disturbance. Thus, Ben manages to save not only his daughter but win over his bitter father-in-law by bringing the number of deaths in the catastrophe down to almost zero. And with that, everyone gets a new lease on life. And if one dead daughter can be brought back from the dead, why not two?

Timescape never gets bogged down in the details of causality, paradox, or other time-travel tropes. I mean, a future Ben prevents his past self from taking the actions that lead to future Ben’s current state and necessitate his time travel in the first place. I don’t even know what to think of that logic. But since this movie doesn’t really care about metaphysical problems of alternate timelines, I don’t either.

Give Timescape a watch. I, too, might just have to go back and do that again in the near future. Or past. My brain hurts.

All images are the copyright of their owners.

Robert Lockard has been a lover of writing since he was very young. He studied public relations in college, graduating with a Bachelor’s degree in 2006. His skills and knowledge have helped him to become a sought-after copywriter in the business world. He has written blogs, articles, and Web content on subjects such as real estate, online marketing and inventory management. His talent for making even boring topics interesting to read about has come in handy. But what he really loves to write about is movies. His favorite movies include: Fiddler on the Roof, Superman: The Movie, Star Trek II: The Wrath of Khan, Back to the Future, Beauty and the Beast, The Fugitive, The Incredibles, and The Dark Knight. Check out his website: Deja Reviewer. Robert lives in Utah with his wife and four children. He loves running, biking, reading, and watching movies with his family.
View all posts by Robert Lockard, the Deja Reviewer →
This entry was posted in Forgotten Film Gems and tagged action movies, david twohy, films, jeff daniels, love, movie review, movies, relationships, science fiction, time travel, timescape. Bookmark the permalink.