Posted on June 27, 2017 by Robert Lockard, the Deja Reviewer

In honor of Ron Howard becoming the director of the upcoming Han Solo standalone film, I present my own take on this surprising turn of events. You see, Howard starred in the pre-Star Wars George Lucas film American Graffiti in 1973. Even back then as an actor, he had aspirations to direct and Lucas nurtured them. They even worked together on the 1988 film Willow. But that was early in Howard’s career, before he really found himself. And Star Wars will always be Lucas’s baby.

Now that Howard is an Academy Award-winning director and he is directing a film in the Star Wars extended universe, it’s only right that we hearken back to the original Star Wars film to make this analogy. May the force be with you, Ron Howard! 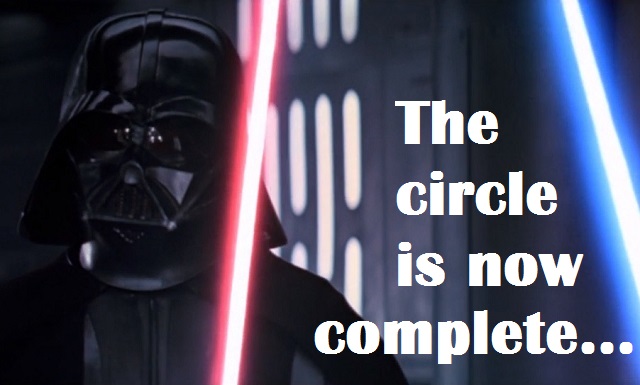 Robert Lockard has been a lover of writing since he was very young. He studied public relations in college, graduating with a Bachelor’s degree in 2006. His skills and knowledge have helped him to become a sought-after copywriter in the business world. He has written blogs, articles, and Web content on subjects such as real estate, online marketing and inventory management. His talent for making even boring topics interesting to read about has come in handy. But what he really loves to write about is movies. His favorite movies include: Fiddler on the Roof, Superman: The Movie, Star Trek II: The Wrath of Khan, Back to the Future, Beauty and the Beast, The Fugitive, The Incredibles, and The Dark Knight. Check out his website: Deja Reviewer. Robert lives in Utah with his wife and four children. He loves running, biking, reading, and watching movies with his family.
View all posts by Robert Lockard, the Deja Reviewer →
This entry was posted in Random Stuff and tagged directors, films, fun, funny, george lucas, humor, jokes, movies, relationships, ron howard, science fiction, star wars, star wars prequels. Bookmark the permalink.