A Behind-the-Scenes Look at How I Uncover Cinematic Chiasmus

Posted on December 5, 2017 by Robert Lockard, the Deja Reviewer

I’ve written more than a dozen articles explaining how the story structure of some special films fall into the category of Cinematic Chiasmus. These are films that unfold in a particular way in which the events in their first half mirror the events in their second half almost perfectly.

Some people might wonder how I’m able to notice such a peculiar and difficult-to-spot way of telling a story on film. That is why I would like to share a bunch of examples of the notes I originally took as I watched the films I have dissected in this manner. Keep in mind that I was pretty rushed as I wrote down these notes, so they don’t always have the best handwriting. But hopefully my words are easy enough to decipher. If you can’t read something, leave me a comment and I’ll be happy to translate it. This could be fun to compare and contrast my original notes to the final articles. I’ll be sure to include links to all of the articles.

Unfortunately, I didn’t save all of the scraps of paper that I wrote my original notes on, so there are only nine I can share. For example, I don’t have the very first piece of paper that I used to write about RoboCop (1987). Oh well. The ones I do have will offer a behind-the-scenes look at how I uncover Cinematic Chiasmus.

The Empire Strikes Back

The Empire Strikes Back was my second Cinematic Chiasmus, and the first one that was perfect. The top half of the chiasmus was easy to match up, but I kept second-guessing myself about the bottom half. 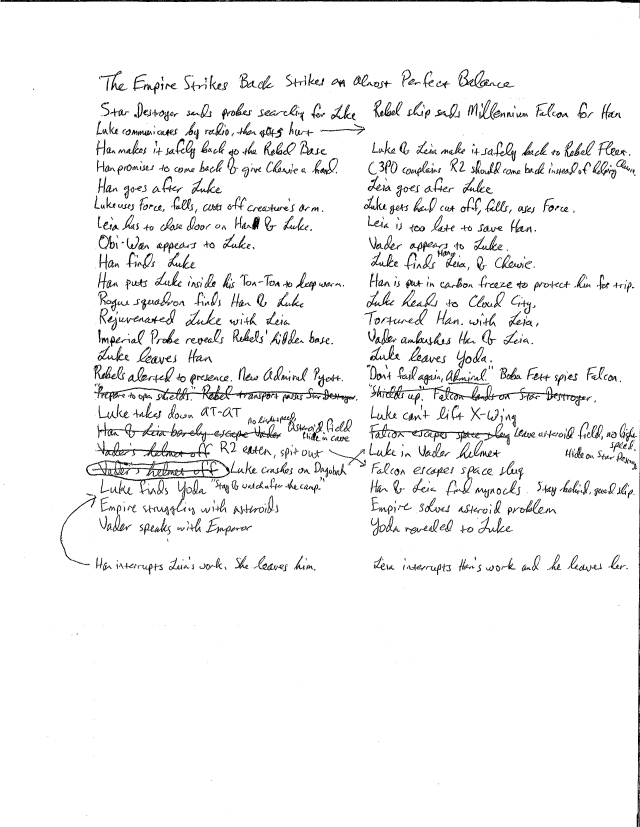 Back to the Future Trilogy

I originally planned on just showing how Back to the Future Part II was a chiasmus. When my wife suggested that I look at the other two films in the Back to the Future Trilogy, I was amazed by what I found. This one was a delight to discover. Notice that I had already figured out the title of the article and the “Hickory Dickory Dock” nursery rhyme I was planning on using at the start.

This one looks like an absolute mess, but I promise it made sense to me at the time. I don’t think any other film in the Alien series would work as a chiasmus, but somehow Aliens works just perfectly. At least the Special Edition does.

Terminator 2: Judgment Day flowed perfectly. As you can see, I had hardly any trouble with this one.

Another nice, clean one. The Last Starfighter works so perfectly as a chiasmus, it really feels like the writer knew exactly what he was doing when he wrote it like this. 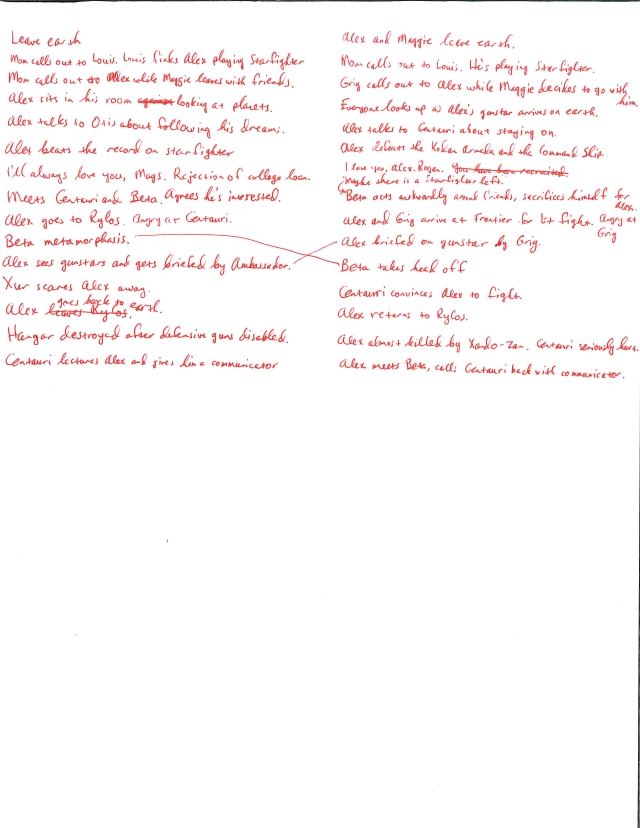 This one is insane. Two whole pages of astonishing symmetry! The Dark Knight Trilogy put me through the wringer, but it was worth it to reveal the secrets of its chiasmus. Such a masterpiece.

For such a long movie, Braveheart has a pretty succinct chiasmus. The series of events in the film were easy to distinguish and categorize, and they worked in perfect harmony with each other. I had no trouble with this one.

WarGames needed a bit of work to finesse into its final form, but I was pleased with it. By the way, the bottom left corner of the page had been torn off, so part of the text is missing. It should say, “David learns about Joshua’s plans.”

I had this one planned out for months, but I was just worried about my ability to properly capture the chiasmus in The Sixth Sense. I shouldn’t have been worried because it turned out beautifully.

I have many more films I can’t wait to analyze and see if they also work as examples of Cinematic Chiasmus. I’ll keep sharing them in the coming years, and I hope you’ll enjoy all of them, along with my other unique perspectives on films.

Robert Lockard has been a lover of writing since he was very young. He studied public relations in college, graduating with a Bachelor’s degree in 2006. His skills and knowledge have helped him to become a sought-after copywriter in the business world. He has written blogs, articles, and Web content on subjects such as real estate, online marketing and inventory management. His talent for making even boring topics interesting to read about has come in handy. But what he really loves to write about is movies. His favorite movies include: Fiddler on the Roof, Superman: The Movie, Star Trek II: The Wrath of Khan, Back to the Future, Beauty and the Beast, The Fugitive, The Incredibles, and The Dark Knight. Check out his website: Deja Reviewer. Robert lives in Utah with his wife and four children. He loves running, biking, reading, and watching movies with his family.
View all posts by Robert Lockard, the Deja Reviewer →
This entry was posted in Cinematic Chiasmus and tagged aliens, back to the future, batman begins, braveheart, chiasmus, dark knight rises, empire strikes back, films, last starfighter, movie review, movies, science fiction, sequels, terminator, the dark knight, the sixth sense, wargames. Bookmark the permalink.